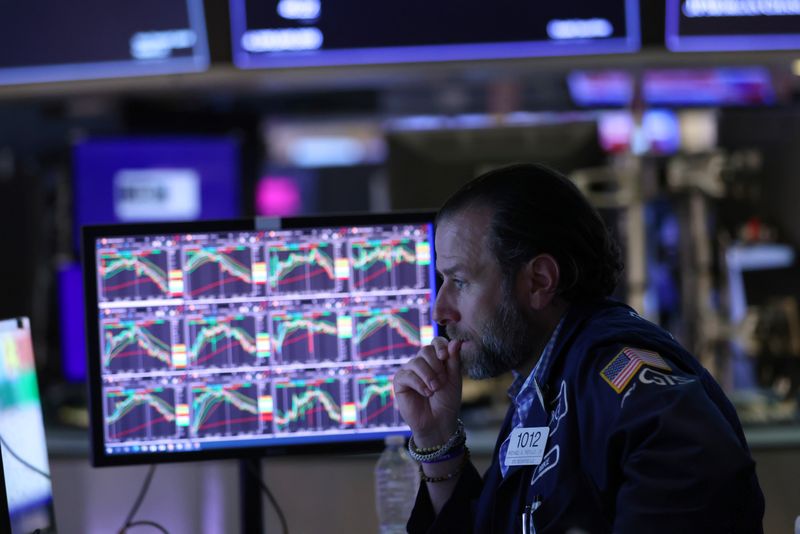 NEW YORK (Reuters) – Some of Wall Street’s biggest names are throwing cold water on expectations that the U.S. economy will escape a recession in 2023, as hopes of a so-called Goldilocks scenario of easing inflation and resilient growth propels stocks higher.

Banks and asset managers that have reiterated recession calls include BlackRock, Wells Fargo and Neuberger Berman, with many warning the Federal Reserve is unlikely to force inflation lower without hurting economic growth.

The odds are “too high on Goldilocks; there’s still no easy way out,” analysts at BoFA Global Research wrote on Tuesday.

The warnings contrast with signs of optimism in markets. The S&P 500 has jumped more than 3% so far in 2023, fueled in part by bets that inflation will continue to slow, allowing the Fed to soon pull back from the rate increases that shook markets last year. The tech-heavy Nasdaq 100 is up some 6%.

“Money is dying to get back into this market but we still think you get an economic slowdown and that earnings expectations are still too high,” said Paul Christopher, head of global investment strategy at the Wells Fargo Investment Institute.

Correctly gauging the economy is crucial for investors. Stocks tend to perform poorly in economic downturns, with the S&P 500 falling an average of 29% during recessions since World War Two, according to Truist Advisory Services.

While recessions are called in hindsight, investors have said that still-robust job growth makes it unlikely that one has already started.

Many strategists are focused on the Fed, pointing to years of market history that suggests the central bank’s rapid rate hikes will eventually force unemployment higher and tip the economy into a recession.

The Fed last year raised its benchmark rate to between 4.25% and 4.50% from zero and is widely expected to increase it by another 25 basis points at the conclusion of its Feb. 1 meeting.

Policymakers have projected their key policy rate would top out at between 5.00% and 5.25% this year. Market pricing indicates investors are taking a more dovish view, with the rate peaking below 5% around mid-June before falling in the second half of the year.

The latter outlook is not shared by BoFA’s strategists, who recommended positions that would benefit from a “grind lower” in U.S. equities, noting that Fed “cutting cycles in history have almost exclusively been associated with either a recession … or a financial accident,” they said.

Charlie McElligott, managing director of cross-asset strategy of Nomura Securities, believes the current rise in stocks is partially driven by under-positioned investors fearful of missing a longer-term shift to the upside, a dynamic that fueled several rallies last year.

“You are now getting the disinflationary impulse that the Fed has been seeking and it’s moving ahead of schedule,” he said. “Now the challenge is that people are under-positioned and are … absolutely being forced into a painful trade because the Fed hasn’t won the fight yet.”

The current stock rally “hints at how markets will likely react once inflation eases and rate hikes pause,” wrote analysts at BlackRock, the world’s largest asset manager, earlier this week. “Before this outlook becomes reality, we see (developed market) stocks falling when recessions we expect manifest.”

Neuberger Berman sees the S&P 500 dropping to as low as 3,000 this year – a decline of nearly 25% from its current level – as rebounding inflation forces the Fed to become more aggressive.

“You need that kind of decline in stock prices to neutralize the wealth effect that is the source of inflation,” said Raheel Siddiqui, a senior research analyst in the firm’s global equity research division.

Of course, plenty of investors are taking banks’ forecasts with a grain of salt.

Burns McKinney, a portfolio manager at NFJ Investment Group, noted that most banks failed to predict the inflationary surge that forced the Fed to ratchet up rates. Strategists polled by Reuters at the end of 2021 saw the S&P 500 gaining a median of 7.5% last year.

McKinney expects any recession to be a shallow one, and is moving into industrial stocks and technology firms that are poised to benefit from slowing inflation.

“Stocks aren’t terribly cheap and they are not terribly expensive either,” he said. “There’s a lot of ways to describe Goldilocks but the market is priced just about right.”