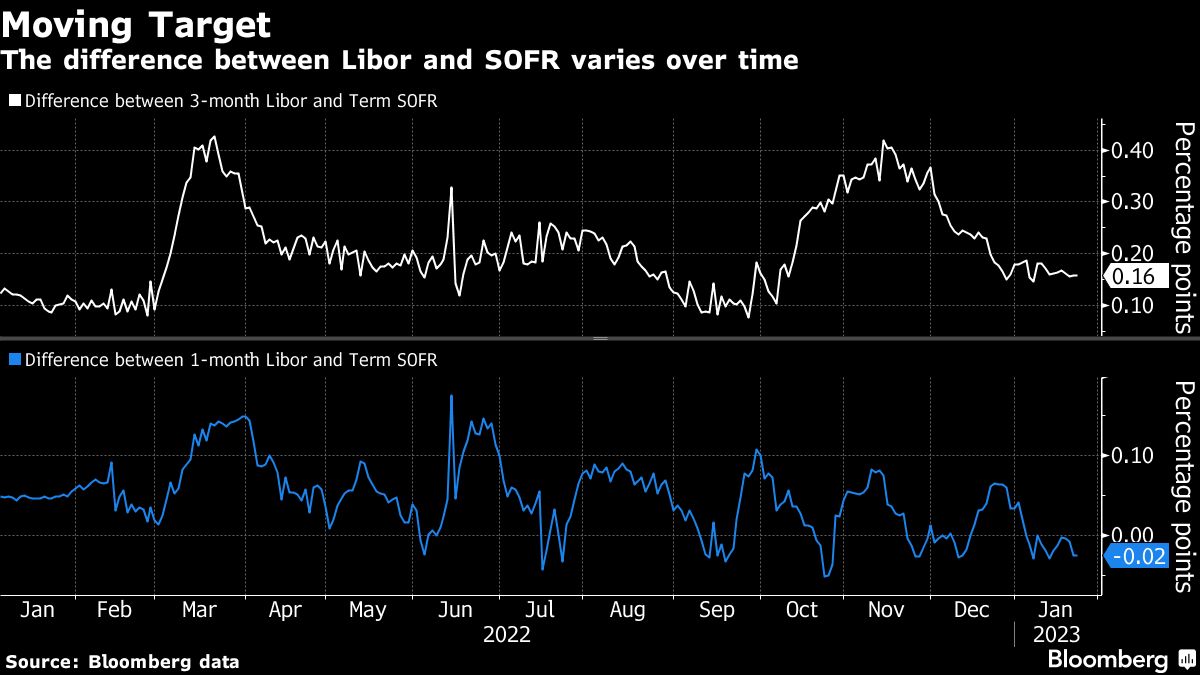 (Bloomberg) — Buyers of the riskiest slice of collateralized loan obligations are stepping up efforts to ensure the transition from Libor doesn’t end up costing them millions of dollars in potential returns.

Most Read from Bloomberg

They’re particularly frustrated that some borrowers have been able to switch their existing loans to the Secured Overnight Financing Rate without including an adjustment blessed by industry officials that’s meant to compensate for the fact that SOFR consistently prints below Libor, allowing companies to reap significant savings at their expense.

The meeting highlights just how serious this issue has become for buyers of CLOs — bundles of junk-rated loans that are packaged into chunks of varying risk and return. CLO equity investors, who’ve faced sluggish gains since mid last year, are particularly exposed given their returns depend on the excess cash flows from underlying loans after higher-ranking CLO debt holders have been paid, and because of the significant leverage built into the structures. Smaller interest payments mean there’s less left over for them to pocket.

“The regulators did not intend for the Libor-SOFR transition to create a windfall for private equity sponsors and loan issuers,” said Dan Ko, principal and portfolio manager at Eagle Point.

Since the call, CLO equity investors, who can’t vote on deal amendments, have begun an outreach blitz to managers ahead of a mid-2023 deadline to transition existing debt away from Libor.

The advocacy appears to already be having an impact. Last week, lenders rejected an amendment that would have flipped a $750 million first-lien loan for Wellness Pet Company to SOFR after the company only offered a so-called credit spread adjustment of 10 basis points.

That came after borrowers Allied Universal and Petco saw their attempts to switch the reference rate on loans rebuffed by creditors last year when they offered no compensation.

The Alternative Reference Rates Committee, the Federal Reserve backed group in charge of overseeing the Libor transition in the US, recommended borrowers provide adjustments of 11 basis points and 26 basis points for loans tied to one- and three-month Libor, respectively.

That’s what many CLOs — which like the leveraged loans they buy are floating rate and have to shift to SOFR before Libor is phased out at the end of June — are set to pay investors.

“It’s a classic mismatch of assets and liabilities,” said Ian Walker, a legal analyst at Covenant Review. “CLOs could potentially have to pay more on the liabilities than they’re getting from the underlying assets.”

CLO equity investors are especially frustrated by proposals tied to loans with so-called negative consent clauses, which comprise about 30% of the US leveraged loan market, according to Covenant Review data. Those clauses require more than half of creditors to actively vote to reject amendments in the span of five business days, in contrast to a typical loan where debtholders must vote yes for an amendment to pass and have longer to review the proposal.

That makes it easy for some to get through. For example, an amendment for software company AppLovin Corp. passed in early January with a 10 basis point adjustment. It launched on Dec. 23 and responses from investors were due on Jan. 3, during a week when much of the market was out of the office for the holidays, raising the ire of many investors.

Representatives for KKR & Co., AppLovin’s private equity backer, and Bank of America Corp., the administrative agent on the existing loans, declined to comment. A representative for the company didn’t immediately respond to requests seeking comment.

The pace of amendment requests is expected to pick up in the coming months. About 75% of the $1.4 trillion US leveraged loan market still needs to pivot to SOFR, according to JPMorgan data. While some of those loans have fallback language that will eventually flip the debt to the new benchmark with the ARRC-recommended adjustments, a large chunk leave room for flexibility, requiring borrowers to negotiate amendments with creditors.

–With assistance from Charles Williams.

Most Read from Bloomberg Businessweek