Although many investors are mixed on the banking sector in 2023, I do see a scenario in which bank stocks perform well if they can manage credit and deposit costs accordingly and there isn’t too severe of a recession this year. One good thing about bank stocks is that many of them pay healthy dividends, and banks will definitely be active buyers of their own stock through share repurchases when they have excess capital.

That’s why a good strategy for this year could be to look at bank stocks that not only are performing well but also return lots of capital to shareholders through dividends and share repurchases. Here’s one of the smartest stocks to buy for this purpose in 2023.

While the brand has been around for centuries, the Citizens Financial Group (CFG 2.81%) that you see today spun out from the Royal Bank of Scotland only in 2014, so it’s really a newer bank. With close to $225 billion of assets, I would categorize Citizens as a super-regional bank. 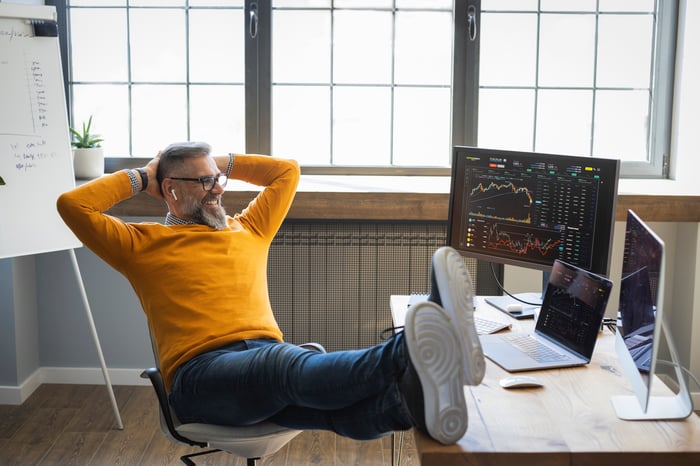 The bank runs a big commercial lending franchise and one of the more interesting consumer franchises across its peer group, which includes student loans, auto loans, and point-of-sale lending, as part of its broader effort to build a national consumer digital bank. In 2022, Citizens completed two key acquisitions, first of HSBC‘s U.S. banking operations, which included 80 bank branches on the East Coast and a national deposit business. Then Citizens closed on its acquisition of Investors Bancorp, which is largely based in the New York City metro area and the Mid-Atlantic and Washington, D.C., region.

Citizens is coming off a nice year and it looks well-positioned for 2023. Net interest income, the money banks make on loans and securities after funding those assets, is expected to rise by 11% to 15% this year, while core expenses are expected to rise only 3.5% to 4% excluding merger costs. Management said the bank thinks it can generate 4% to 5% of operating leverage, which means growing revenue faster than expenses. Furthermore, Citizens thinks it can hold credit fairly stable in 2023, with loan losses expected to rise but still end the year in a very healthy range.

A key ratio to look at in order to assess a bank’s capital position is its common equity tier 1 (CET1) capital ratio, which looks at a bank’s core capital expressed as a percentage of risk-weighted assets such as loans. At the end of 2022, Citizens had a 10% CET1. The Federal Reserve is requiring Citizens to maintain only a 7.9% CET1 this year, which means Citizens had about $4 billion of excess capital beyond what it is required to hold, which currently equates to about 20% of its total market cap.

It’s with this excess capital that it can issue dividends and buy back stock. At its current stock price, Citizens has an annual dividend yield of over 3%. While the bank hasn’t raised its dividend every year since it was spun out, it has grown the dividend by 320% since 2014.

But even more exciting this year is the amount of stock the bank plans to repurchase this year, according to Citizens CEO Bruce Van Saun. “We expect to repurchase a meaningful amount of stock, given strong profitability, modest loan growth and limited expectation for acquisitions, with our CET1 ratio forecast near the high-end of our 9.5% to 10% range. Capital return to shareholders should approach 100% and yield to investors of our dividends plus capital return via repurchase through 12%,” he said.

This could be just the beginning

Obviously, there is a lot of uncertainty this year over whether there will be a recession and how severe that recession could be if there is one.

But even after this year’s repurchase plan, Citizens will likely still be sitting on a huge capital cushion above its CET1 requirement. If there is more clarity in the economy, then management may bring down its internal target over time. The regulatory environment for large bank acquisitions has become much more difficult, and Citizens still needs to integrate the two acquisitions it just closed on in 2022, so the best use of excess capital is likely repurchases unless some golden acquisition opportunity arises.

With Citizens trading at about 150% of its tangible book value and at less than 8 times forward earnings, I also think the valuation is pretty reasonable here, especially on a long-term basis.