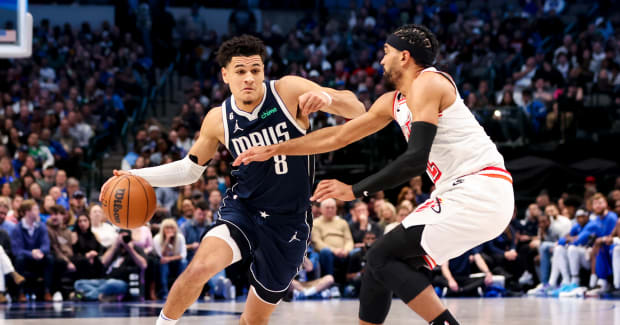 Since the Dallas Mavericks (25-22) lost Jalen Brunson in the offseason to the New York Knicks, the need for another secondary ballhandler and playmaker has been evident.

Of course Spencer Dinwiddie has stepped in to the starting guard spot next to Luka Doncic, but no one else on the roster has shown the ability to fill the void left by Brunson.

However, the evolution of Josh Green’s offensive arsenal has started to turn heads.

Green always showcased above-average vision and has thrown some nifty passes in the past, but this season, Jason Kidd has put the ball in his hands more and has trusted Green to facilitate for the Mavericks.

“Since day one that coach came to the Mavs, it’s actually been a big focus on working out, working on my ball handling, he saw that I could pass the ball,” Green said after Dallas’ 115-90 win on Friday over the Miami Heat.

In the victory, Green finished with 12 points, five rebounds, and three assists with a +13 in 27 minutes off the bench in just his first game back after missing 20 games due to a shoulder injury.

When Green was drafted by the Mavs with the No. 18 pick in the 2020 draft, his elite athleticism and defensive abilities stood out, but his raw offensive game needed work.

With the trials of Facu Campazzo and Kemba Walker fizzling out, and rookie Jaden Hardy still fighting for minutes, Kidd has trusted Green to fill the role as a secondary playmaker off the bench due to the improvement the third-year guard has shown. Green is averaging a career-high 7.3 points per game on a career-high 44.8 percent from downtown.

Now, by no means is Green going to dice up a defense as a playmaker like Doncic does on a nightly basis, but he’s a jack of all trades and can impact the game all over the floor on both ends. The Mavs will need every bit of that production if they want to go as deep in the playoffs as they did last year.

“I mean [Josh Green]’s great,” said Doncic. “He’s just out there [and] comes with a lot of energy. The energy that he brings is really good, so it really helps us a lot.”

Want the latest in breaking news and insider information on the Dallas Mavericks? Click Here.